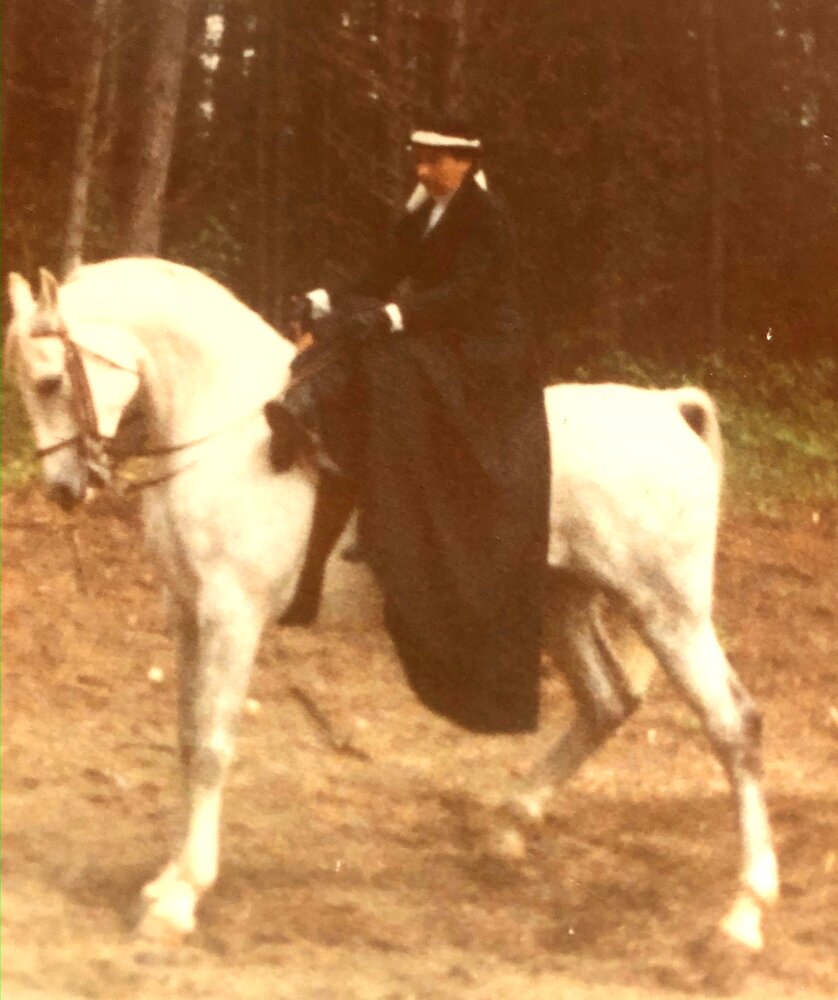 Joan Winnefred Young, (McKay, née Warden) resident of Beaverlodge, AB, passed away on Saturday, November 12, 2022, at the age of 84 with friends and family by her side. Joan was born in Meadow Lake, SK, on January 31, 1938. She attended High School and Nursing School in Prince Albert, SK. She nursed in Edmonton, AB, at the Royal Alex and U of A Hospitals. Joan earned her Bachelor of Education degree in 1979. She then taught in Grande Prairie, AB, until her retirement in 1995. Between her nursing and education degrees, Joan earned a wonderful new title, Mom. Joan became the mother of two sons, Kent, and Wade. Joan and Al were married on July 20, 1985. Gambler’s Choice Farm was founded in 1987, and for the next 20 years she and Al spent their time raising and riding horses together. One of Gambler's Choice’s first foals was Star, a purebred Arab, who became one of Joan’s favourite riding horses. Later came a warmblood cross, Dixie and Bar whom Joan rode in a drill team. In 2000, upon Joan’s return from Edmonton after a heart attack, Benny, a newborn colt, left his mother to go to Joan at the fence. Joan and Benny would be inseparable until his death earlier this year. Joan’s love of horses started at a very young age and continued for her entire life. We feel that she was waiting to get to heaven to ride again. As a youngster, she snuck into the field to ride the neighbor’s horse. At 17 she got her first horse, a Palomino. In 1966 Joan bought an Arab yearling. Together Joan and Ozzy would conquer the Trail riding world. In 1975 Joan and Ozzy won Grand Champion of the Alberta Trail Riding Conference of which Joan was a founding member. Joan will be missed by Al, her husband of 37 years, son Wade McKay and daughter-in-law Tammy McKay; stepdaughters: Natalie (Darcy) Mayne, and Dawn Marie (Mike) Westad; step-grandchildren: Courtney (Thayne) Erickson and Justin Mayne; special friend Margie Fleetwood, and niece Kathleen Kemp (née Warden). Joan was predeceased by her parents Jack and Florence Warden of North Battleford, SK, her brother John Warden, and her son Kent McKay. As per Joan’s wishes, a service will not be held. In lieu of flowers, memorial donations may be made to the Canadian Juvenile Diabetes Association (www.jdrf.ca), or to the Canadian Cancer Society for Breast Cancer Research (201, 9452 51 Avenue NW, Edmonton, AB T6E 5A, www.cbcf.org).
Share Your Memory of
Joan
Upload Your Memory View All Memories
Be the first to upload a memory!
Share A Memory