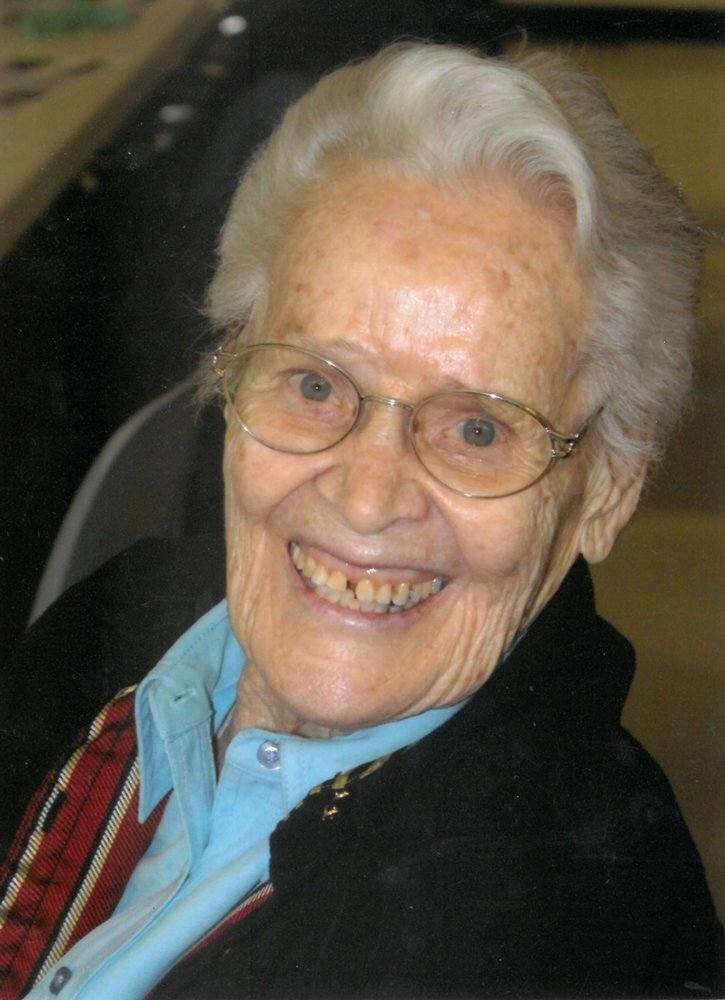 Eleanor Harrison, a lifelong resident of Grande Prairie and area passed away on Tuesday, January 2, 2018 in the Grande Prairie Care Centre at the age of 93 years. Laura Eleanor Oatway was born on May 18, 1924 to Jack and Anna Oatway and was raised on the family farm in Clairmont. She was the seventh of nine children. Her childhood was happy, filled with farm life, school and sports. She was always a pacifier and peace-maker among her siblings and school friends. After graduating with her diploma from Grande Prairie High School, Eleanor worked as a telephone operator. In 1944 she married Raymond Harrison, the boy from down the road. They moved to Edmonton where Eleanor worked for Eaton's Department Store and Ray worked at Burnes Meat Packers. In 1949 they returned to Grande Prairie. In 1950 they rented land and took up farming. Murray was born in 1952, Patricia in 1954 and Colleen in 1957. In 1958 they bought the Rainer property on the west side of Bear Lake. They carried on a mixed farming operation until Ray's death in 1973. In 1974 she left the farm and in 1975 got a job with the County of Grande Prairie as an Assistant Agricultural Fieldman. In 1976 she became the Agricultural Fieldman for the Municipal District of Spirit River, the first woman in Alberta to hold such a position. In 1978, Eleanor started her own vegetation management company, “The Weedbusters”. Since then, Eleanor has been the driving force behind a thriving and successful small business. She was the oldest licensed and practicing pesticide applicator in Alberta. The Weedbusters is the longest continuously serving contractor for the Weyerhauser/IP Pulpmill in Grande Prairie at 36 yrs. Her customers always respected and appreciated her expertise, efficiency and professionalism. Eleanor loved her family and her heritage. She was a past president for and remained involved with the Old Timer's Association until her passing. Eleanor leaves to mourn her three children: Murray (Joanne), Patricia and Colleen and her grandsons Shawn, Kris and Ryan. She is also survived by her sister Irma (99), brother Donald (96) and sister-in-law Dawn Oatway. Eleanor was a force of nature, deeply loving and deeply loved. She had a hug and a smile for everyone. She will be profoundly missed. Eleanor was predeceased by her husband Ray (1973), daughter Erin (1951), parents (Jack and Anna), siblings Gordon (Marj), Edwin (Hannelore), Helen (Silas, Einar, Gordon), Lorne (Dawn), Murray (Alice), James (Wilma), brother-in-law Adolf Tory, and sister-in-law Marj Oatway. A Memorial Service was held on Tuesday, January 9, 2018 at 2:00 PM at the Salvation Army Grande Prairie Community Church, 9525-83 Avenue, Grande Prairie, AB T8V6V1. Interment will take place at a later date in the Grande Prairie Cemetery. For friends so wishing, donations may be made in memory of Eleanor to the Salvation Army 9615-102 Street Grande Prairie, AB T8V2T8, or to the Grande Prairie and District Old Timers' Association, PO Box 21028 Grande Prairie, AB T8V6W7. Very Respectfully Beaverlodge Funeral Service
Share Your Memory of
Eleanor
Upload Your Memory View All Memories
Be the first to upload a memory!
Share A Memory