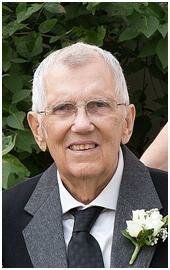 James (Jim) George Sunderman, at the age of 84 years, entered the presence of God on Monday, December 12, 2016 with his family surrounding him and singing his favorite hymn, Amazing Grace. Jim was born with his twin Gerald (Jed) in Heisler, Alberta to John and Alice Sunderman on July 16, 1932. He was the eldest of 5 boys (Jed, Sid, Lyle and Bud). The family lived in Heisler until they moved to the Lac La Biche area eventually purchasing a farm at Fork Lake where he attended school. After which he worked for a local logging company learning to run a power saw. Jim and his twin brother Jed worked on the barges going up river from Great Slave Lake. He and his twin brother later moved to Hythe in 1954 and he worked in the logging industry at Bordens in Demmitt. Later Jim and Jed worked for their cousin in the power line construction industry installing the first power lines through the Peace River area. Both brothers then worked for the Utilities companies, Jim as a gas line fitter at Northland Utilities while Jed worked the electrical side for Canadian Utilities as the company policy would not allow family members to work in the same company together. He met his wife Frances Wyant while living in Hythe and were married on May 5, 1961. They had three children, Cathy, Kevin and Lori. Over the years, they lived in Hythe, High Prairie and Grande Prairie until his retirement in 1992 after which they moved to Lymburn and lived there for 22 years, moving into Beaverlodge in October of this year. Jim was a volunteer firefighter in High Prairie and was deputy chief of the department until his transfer to Grande Prairie. He was a long time legion member, IOF member, square dancer member of both Grande Prairie and Ray Lake square dancer clubs. He enjoyed traveling, hunting, fishing, camping, gardening, dancing, and playing his guitar. He was always tinkering in the garage building and doing woodwork. He always had a special place in his heart for children, especially his grandchildren and great grandchildren. Jim has had a long battle with cancer since 1995 and leaves behind his loving wife of 55 years Frances, his children Cathy (Ernie) Bartsch, Kevin (Corinne) Sunderman, Lori (Mel) Sunderman-Smith; grandchildren Jolene (Brad), Loyd, Cole, Ryan, Daniel, Natasha, Joshua, and Matthew; great grandchildren Evelyn, Jacqueline and Audrey. A Visitation was held on Friday, December 16, 2016 from 7:00 PM-9:00 PM at Beaverlodge Funeral Service, 1103-7th Avenue West, Beaverlodge. A Memorial Service was held on Saturday, December 17, 2016 at 2:00 PM at the Hythe Legion. Pastor Terry Hatfield officiated. A private family interment was held in the Hythe Cemetery. For friends so wishing, donations may be made in memory of Jim to the Alberta Cancer Foundation, 710-10123 99th Street Edmonton, AB T5J3H1, or towards Merkel Cell Research under ‘Join the Fight’ at merkelcell.org. Very Respectfully Beaverlodge Funeral Service
Share Your Memory of
Jim
Upload Your Memory View All Memories
Be the first to upload a memory!
Share A Memory