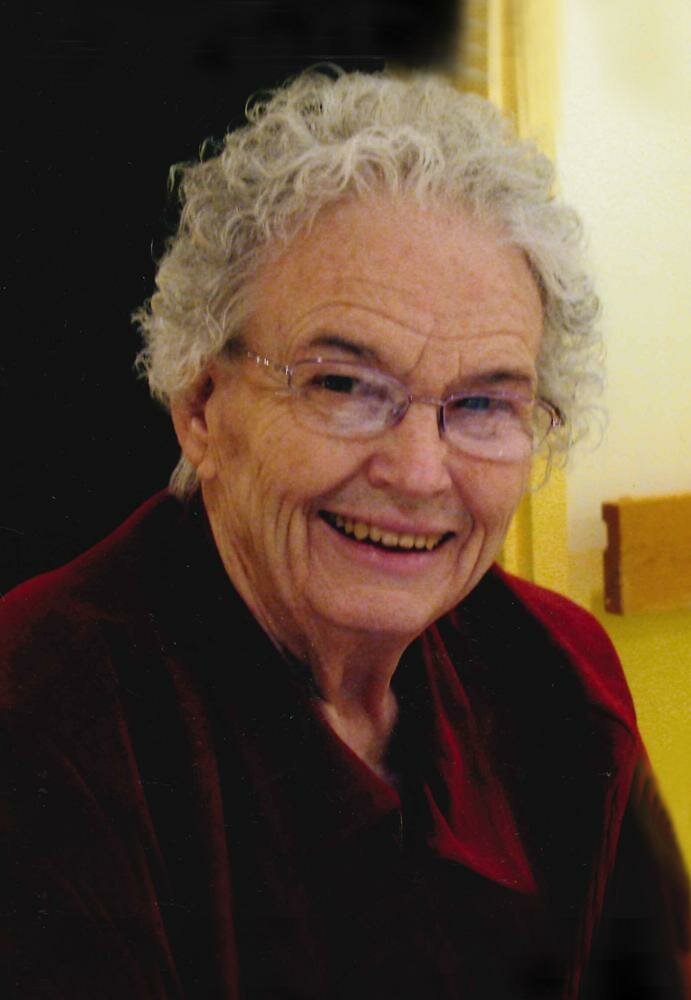 It is with great sadness that we announce the passing of our loving mother, grandmother and friend, Shirley Olson. Shirley passed away on Wednesday, February 15, 2017 in Points West Living, Grande Prairie, Alberta at the age of 83 years. Shirley was born on November 28, 1933 to William and Margot Shipley in Wetaskiwin, Alberta and was raised on the family farm in the Westerose District, East of Ponoka. Shirley was involved in 4-H and the Youth Group at the Svea Lutheran Church. She also participated in normal teenager activities like going to Ponoka to watch hockey, and baking and sewing. She attended elementary and middle school at Water Glen and completed her high school in Ponoka where she boarded with family friends. Following her high school graduation, she went on to Canadian Lutheran Bible Institute where she completed a two-year diploma in May of 1954. This is where she met her future husband, Roald, who was there on tour with the Men's Quartet. After Bible School she went on to complete her nursing training in Edmonton. Roald and Shirley's courtship lasted eight years while she finished school and her nursing training with Roald travelling to Edmonton and Ponoka to visit her. They went on to wed on January 17, 1959 at the Svea Lutheran Church in Water Glen. They settled in Sexsmith where Shirley worked as a public health nurse throughout the Peace Country and Roald worked at the family butcher shop. After years of nursing, she joined Roald in the family business doing books, going to Grande Prairie to get supplies for the store, and working behind the counter serving customers. In 1968 they adopted Doug, and then two years later in 1970, adopted Darryl. Some of the things Shirley enjoyed and was involved in was being an accomplished pianist and organist, playing weekly at Christ Lutheran Church in Sexsmith, as well as for the Lutheran Men's Quartet. She enjoyed gardening, peonies were one of her favorite flowers to grow and hers always looked amazing. She also put her nursing and cooking skills to use volunteering at Peace Lutheran Bible Camp, as well as being involved in the Sons of Norway and LCW. Shirley also enjoyed travelling, they visited Norway, Mexico, Hawaii and numerous places in the United States and Canada, visiting family and friends. After retirement they had a home in Mesa, Arizona that they lived at during the winter months. In 2000 they sold their farm and moved to their condo at Emerald Gardens. Shirley continued living there until her health forced her to move to Mackenzie Place in 2008. She later moved to Points West Living where she received tremendous care by a team of amazing staff and nurses. Because of her faith in her Lord and Savior Jesus Christ, letting her go and saying goodbye is much easier. She has wanted, for years, to go and be with Roald and now she is with him again. For years she has been bedridden, now she walks. It is in those things her family takes such comfort. Shirley was predeceased by her husband Roald, her father William Shipley and her mother Margot Shipley. Shirley was survived by her sons Douglas Olson (Shelley), Darryl (Twila) Olson and Val (Darin) Olson/May, as well as her grandchildren: Taylor, Christina, Kaiden, Sarah and Marcedes, along with numerous family and friends. A Funeral Service was held on Wednesday, February 22, 2017 at 1:00 PM at the Grace Bible Fellowship Church, 9515-93 Street, Sexsmith, AB. An open visitation was held from 12:00-1:00 PM. Pastor Mark Lapointe officiated. Interment followed in the Emerson Trail Cemetery. For friends so wishing, donations may be made in memory of Shirley to the Peace River Bible Institute, P.O. Box 99 Sexsmith, AB T0H3C0. Very Respectfully Reynars Funeral Home and Crematorium
Share Your Memory of
Shirley
Upload Your Memory View All Memories
Be the first to upload a memory!
Share A Memory