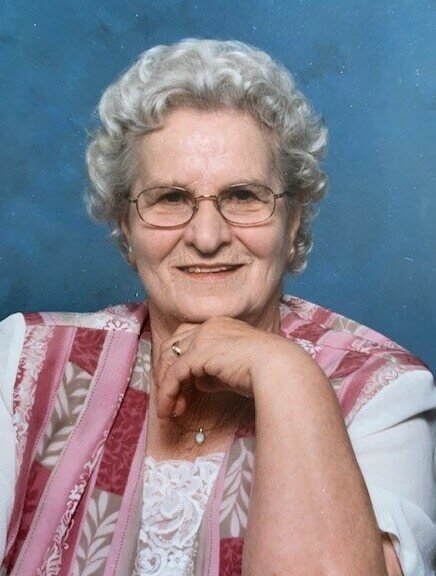 Our dear mother, grandmother, and great grandmother, Irma Mayer, slipped peacefully into eternity on Saturday March 12, 2022, at the age of 96 years. Irma Mayer (nee Wolski) was born on November 14, 1925 in Michelsdorf, Poland to Euphrosine (Kaut) and Adolf Wolski, the third child in the family of ten. As an infant she was received as a member of God’s Kingdom through the sacrament of Holy Baptism in Poland. In 1929, at the age of 3, she immigrated to Canada along with her parents and sisters Rosie, Elsie, and Hulda sailing from Danzig, Poland to Halifax, Nova Scotia. Even at the age of 90 Irma still remembered eating the sugar cubes from the dining room and thinking that they were the best thing she had ever tasted! The family traveled by train and horse-drawn cart to Hines Creek in northern Alberta where her parents began homesteading. Irma was confirmed at the age of 13 at the Hines Creek Lutheran Church by Reverend Liske. The Wolski family moved to the farm in the Halcourt area and then later in the Wembley area. Irma met Val Mayer at a Young People’s group at St. John’s Lutheran Church and their friendship grew into love for each other. On October 22, 1944 Irma Wolski and Val Mayer were united in holy matrimony at St. John’s Lutheran Church by Rev. Ohlinger. The Lord blessed Val and Irma’s marriage with six children, four daughters, and two sons. Irma was always an active member of St. John’s Lutheran Church serving faithfully in the Ladies’ Aide, attending the bible studies, and helping with many church functions. Irma loved to serve behind the scenes, baking for church functions and serving in the church kitchen. Irma had the gift of hospitality and welcomed many people into the farm kitchen for wonderful home cooked meals and baking- bread, buns, cakes, butter tarts, pies, matrimonial cake, cream puffs, and cookies were lovingly served on countless occasions throughout the years. While still on the farm, she took great joy in raising her broilers and turkeys and especially in gardening and her flower beds. Irma and Val farmed for 33 years in the Huallen area. In the fall of 1977, they retired from farm life into the city of Grande Prairie where Irma realized a lifelong dream of working in a hospital. She loved to go to work and thoroughly enjoyed her short career at the Grande Prairie Hospital. She was also able to continue her passion for gardening and tending the beauty of her flower gardens and of course to opening their home to many friends and family. Irma loved to sing the great hymns of the faith as she worked in the kitchen or outside in the farmyard. Her family often woke to the sounds of their mother singing hymns in the kitchen as she prepared breakfast for her family. She continued to read her bible and sing hymns from the hymnbook to her final days. Some of her favourite hymns were “What A Friend We Have In Jesus”, “The Old Rugged Cross”, “Softly and Tenderly Jesus is Calling” and many others. Irma leaves to mourn her passing her children, Grace (Ken) Dombrova of Grande Prairie, AB, Shirley (Don) Nicholls of Kelowna, BC, Valerie (John) Reichert of Beaverlodge, AB, Carl (Carol) Mayer of Beaverlodge, AB, Howard (Patricia) Mayer of Grande Prairie, AB, and Darlene Janzen of St. Albert, AB, 19 grandchildren, and 39 great grandchildren, 1 great-great grandchild. She also leaves to mourn her sister Anna (Jack) Humphrey, brother Rudolf Wolski, sisters-in-law Joyce Wolski and Inge Wolski, many other family members on the Wolski and Mayer side and many friends. Irma was predeceased by her loving husband of 59 years, Val, her granddaughter Kelli Mayer, her parents Adolf and Euphrosine Wolski, her sisters Rosie (Hampel), Elsie (Stierle), Hulda (Hennis), Hilda (Watson), and brothers Daniel and Carl Wolski. Irma was a firm believer in Jesus Christ for the forgiveness of sins and the promise of eternal life and longed expectantly to go ‘Home’ and be with her Saviour. On March 12, 2022 in Grande Prairie, Alberta, Irma slipped peacefully from this life and is now, by God’s grace, through faith, at home in heaven with her Lord and Saviour, Jesus Christ. ‘To God be the Glory!’ Irma’s earthly remains will be laid to rest next to her husband Val’s at the St. John’s Lutheran Church cemetery, there to await the resurrection of all flesh. A funeral service will be held at St. John’s Lutheran Church which is located 2 miles south of the Huallan corner (Range Road 92) and one mile east (Twp Rd 712), on Saturday, March 19, 2022, at 1:00 pm. Pastor Ken Eifert will officiate. Interment to follow immediately after the service in the St. John’s Lutheran Cemetery. Following the interment, the family invites everyone back to the church building for lunch. For friends so wishing, memorial donations can be made to The Lutheran Hour, 270 Lawrence Avenue, Kitchener, ON, N2M 1Y4. Very respectfully, Beaverlodge Funeral Service.
Monday
14
March

Get Directions
Share Your Memory of
Irma
Upload Your Memory View All Memories
Be the first to upload a memory!
Share A Memory