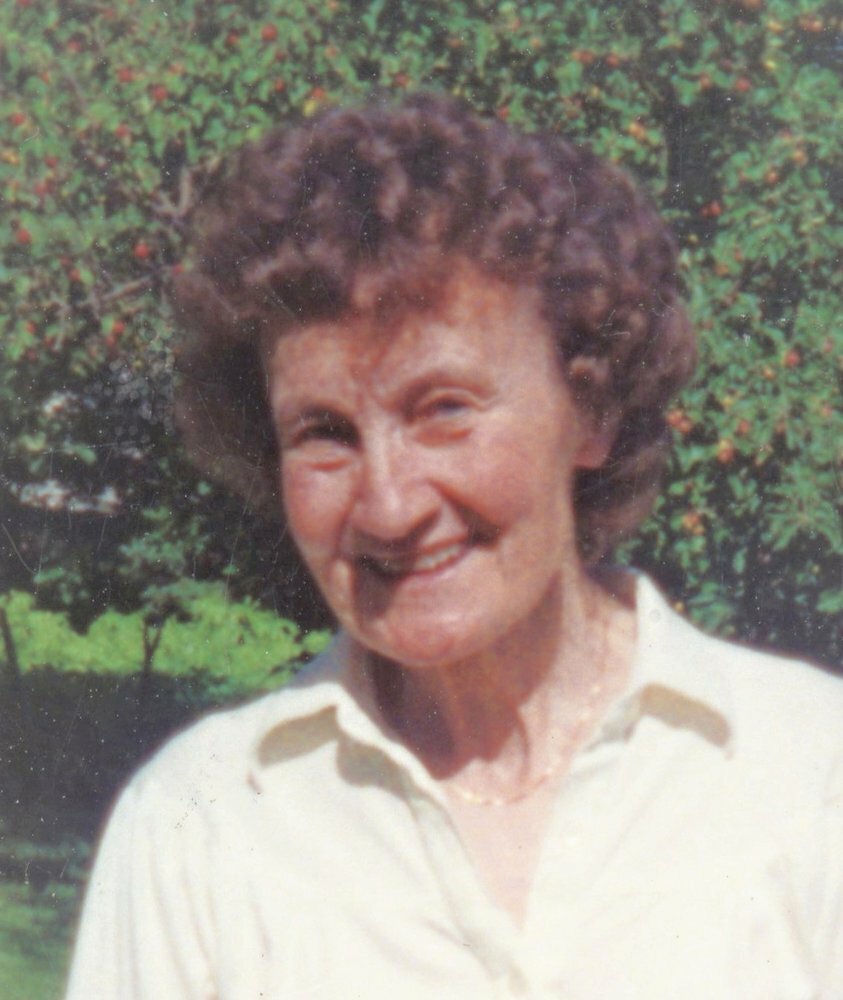 Mary Thoreson of Huallen passed away peacefully on June 30, 2020 at the age of 95 years. Born to Nicholas and Irene (Hewko) Kachaluba on November 15, 1924, in then Polish-ruled Ukraine, Mary joined an older sister Anastasia (Nellie White). Following their father who had emigrated to Canada in 1927, the rest of the family joined him in 1929 on their homestead quarter on the east slope of Saskatoon Mountain. There the family was completed by the home birth of Genevieve (Genny Sutherland) in 1930. As with countless early immigrant families to Canada, life was hard in the ‘30s. There were trees to be cleared by hand and horse; buildings, gardens and livestock to be raised. Everyone contributed. Her walk to Mountain Trail School was 4 miles distant - to and from each day, winter spring and fall. Thankfully it was only uphill in one direction. The importance of family and generosity of neighbours was a lesson learned in her early life. It was a similar story for Ted Thoreson. He had come to Canada from Minnesota as a boy, having grandparents who had emigrated there from Norway. Through Mary’s long life of hard work, she exhibited an example of generosity and character that set a high bar for all who knew her. Mary started shipping cream from a few cows to Grande Prairie via the NAR from the Huallen rail siding. Eventually the Thoreson farm became a sizeable whole milk producer. Daughter Pat (Jacobs), and son Ron Thoreson were raised alongside relatives and neighbours in the hamlet of Huallen. With a later adjacent egg producer across the tracks from the dairy, some said the hamlet seemed to have evolved into “the omelet of Huallen”. When Ted retired from full-time farming, Mary went back to college and took on a new career in 1968 as a legal secretary for Elmer Logan, QC, and his later partners, Jim Watson et al. On her retirement she was again fully immersed in her gardening, flowers, and helping Pat, Clem, and their son Dean with chores as needed. Though socially reserved, and with an aversion to being in front of a camera, Mary was a family model for caring and compassion. She had grown up on a farm with a full table but little cash; as an adult she always grew more produce than she could use, and though able, her spending was never for her own comforts. An unfailingly considerate and polite resident for three years, she was appreciated by staff at Hythe Continuing Care Centre. Mary was - and her extended family are - truly grateful for the kindness and care she received from all the staff. Earlier visits from home care staff were also greatly appreciated as her needs grew, until she transitioned to full care in her last three years. These are challenging times for care-givers and care facilities, and the staff merit our full support. Mary was predeceased by her parents and sisters; husband Ted Thoreson (1993); and her daughter Pat Jacobs (2014). She is survived by son-in-law Clem Jacobs, and their son Dean Jacobs. She is also survived by her son Ron Thoreson and his wife Donna, and their daughters: Crystal (Aaron Robson), Leanna (Darcy McKenna), Melissa, and Laura. She leaves eleven great-grandchildren, two great great-grandchildren, and extended family through marriage. Cards, letters, notes and visits from Dorothy (White) Kruger and daughter Nadine, Valerie (Bissett) Siemens, and Naden Hewko always brightened her days with a renewed family connection. Respecting Mary’s wishes, there will be no formal service. Neighbours, friends and acquaintances are instead encouraged to take a few minutes to reflect on the blessings we have reaped from early immigrant families. They were our pioneers. They endured hardships and obstacles, sacrificed much, and played a vital part in improving their new country. With their different skills and diversity, immigrants bring strength and resilience to our country. As history has shown, they can also help us build a better future. Very Respectfully Beaverlodge Funeral Service
Share Your Memory of
Mary
Upload Your Memory View All Memories
Be the first to upload a memory!
Share A Memory