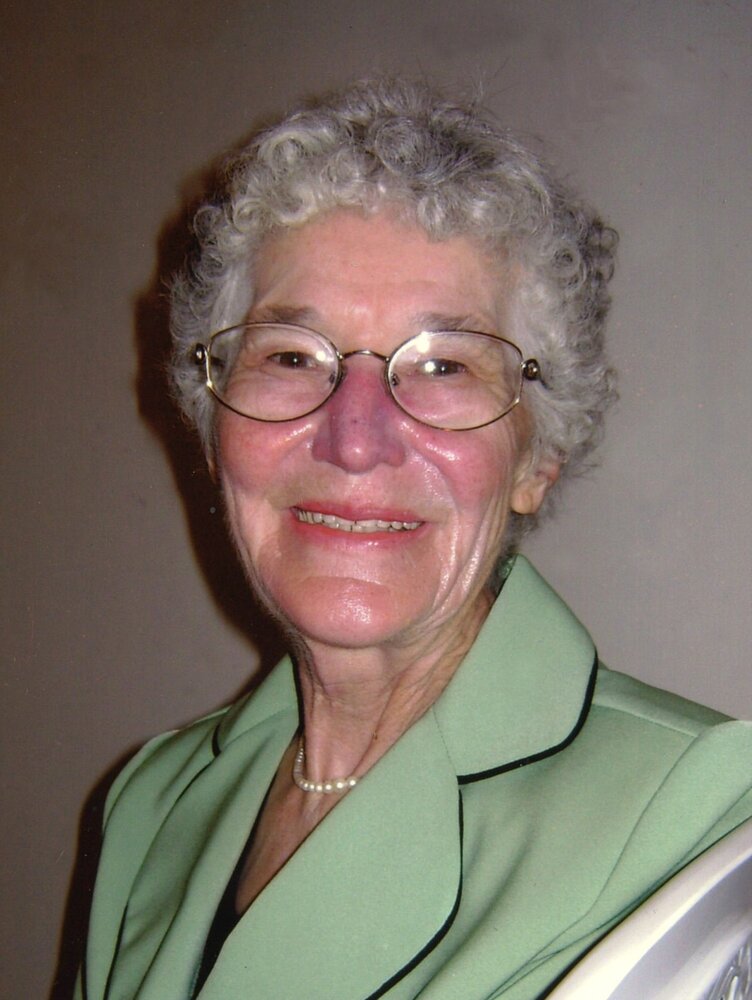 Karen Elisabeth Camplair, resident of Hythe, Alberta, passed away peacefully on the morning of November 2, 2021 at the age of 86, surrounded by her family. Karen Elisabeth von Wolff was born on April 4, 1935 in White Plains, New York, USA where her mother was working as a governess for a wealthy family. Her parents Arved von Wolff and Freda Tenge had married in Canada the previous year, but Freda had to return to White Plains to fulfill her contract. When her mother had recovered from the difficult birth and Karen was almost three months old, they left by train from White Plains and travelled across the country to Beaverlodge to join Arved at the homestead in Goodfare. Karen attended the Pendleton school; two and a half miles walk or dogsled ride from home, and then attended high school in Grande Prairie staying at the Wapiti Lodge dorm graduating with honors in 1953. She stayed in the Wapiti Lodge during the week. On the weekends, she rode the train from Grande Prairie to Albright where her dad would pick her up with his tractor and take her the nine miles back home. She then worked in the kitchen at the Beaverlodge hospital staying in the hospital dorm until she married the love of her life, Harry George Camplair. She met him while her dad and Harry’s dad were trading rams while in her early teens. After asking a few times she finally said yes, and they were married July 30, 1954. The following year they started their family with Marjorie (1955), Ken (1956), Lawrence (1957), Nancy (1962) and Glen in 1965. Karen was a lifelong learner, interested in the world and her community. She loved reading, playing cards, gardening, fishing trips to the mountains, the outdoors, and her family. She always had time for her grandchildren, and if they asked to go on a walk or read a book, she would stop whatever she was doing to give them that special time. Mom enjoyed sewing for her children and grandchildren. After her husband passed away, she took her grandson to Germany to visit relatives there. She also went to Montana to visit a family that her mother was a governess for. She went on a 10-day horseback camping trip in the Kakwa falls area when she was in her seventies. She was a true pioneer farm wife. There was nothing she could not do from milking cows, driving tractors and combines, helping cows calve, hauling grain, and helping dad hay. She always had a big garden. She loved to have big family gatherings on holidays. She loved to meet people and she volunteered at the Hythe nursing home for many years. Karen is survived by her children Marjorie (Darcy) Carrell and their children; Clint (Taryn) Carrell and their children; Connor, Sydney, and Kennedy; Shaun (Josie) Carrell and their children Adrian, Gabe, Evan, and Jakob; Nikki Carrell; Beau (Stephanie) Carrell and their children Austin and Brooke. Ken (Zwaanette) Camplair and their children; Benjamin, Daniel (Heather) and Jonathan. Lawrence (Monique) Camplair and their children; David (Kylee) and their daughter Katie-Lynn; Melissa Camplair; Eric (Nancy) Camplair and their children Connie, Bobbie-Jo, Avangeline and Marie; Emily (Christopher Blew) Camplair; Renee Camplair and her children Maddie and Saydee Camplair. Nancy (Gary) Carpenter and their daughters; Holly (Nicolas) Samji and their son Nathan and Erin (Matt Boyd); Glen (Wendy) Camplair and their children Michael, Yvonne, and Monica; sister-in-law May Jones and numerous nieces and nephews in Canada and cousins in Germany. She was predeceased by her husband Harry in 1994, her parents Arved and Freda; her father and mother-in-law Curt and Mary Camplair; her infant brother; her great-grandson Fraser; sister and brother-in-laws Ellen and Bert Hatton, Herb Camplair, Jean Camplair, Jeannette and Bob Mulligan, and Doreen and Harold Pfau and her niece; Pauline Camplair. A funeral service will be held on Saturday, May 21, 2022 at 10:30 am at the Beaverlodge United Church. A luncheon will follow after the service. A private family burial will follow the luncheon. Friends wishing to make donations may be made in Karen’s memory to Hythe Continuing care center, PO Box 100, Hythe AB T0H2C0; or to The Salvation Army, 2 Overlea Blvd, Toronto ON M4H 1P4. Very Respectfully, Beaverlodge Funeral Service.
Share Your Memory of
Karen
Upload Your Memory View All Memories
Be the first to upload a memory!
Share A Memory