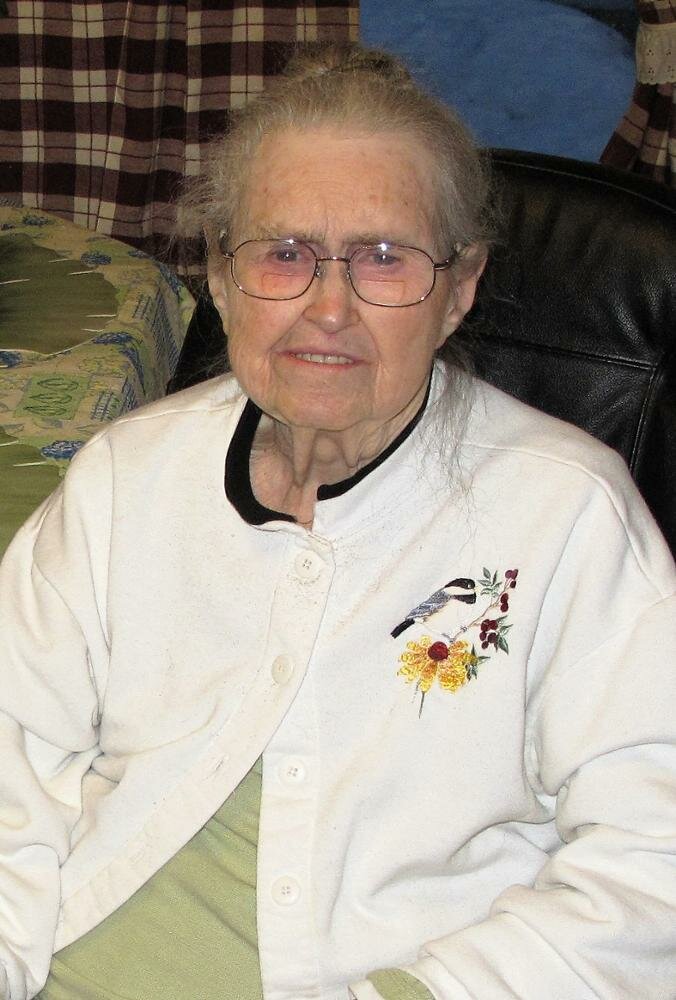 Geraldine (nee Clark) Schlemmer, a long time resident of Hythe, Alberta passed away on Monday, September 12, 2016 in Hythe at the age of 98 years. Geraldine was born April 22, 1918 in Geraldine, Montana. She was the first born of three children. Geraldine had all of her education in Montana, except for Grade 7 when she went to stay with her grandparents in Illinois. They brought her home the next summer as they wanted to see the western states. This was one of her many highlights in life. In her senior year she had to drop out of school due to illness. She was a member of the Young People's Group and choir where she met her future husband. In 1935, she married Alfred Schlemmer on December 28th. They had five children; David, Kay, Danny, Mike and Loretta. They sold their grain farm in 1963 and they moved south to Big Timer, Montana where they bought a cattle ranch. It was irrigated land which was something completely different than they were used to. In 1968 they decided to move north to Canada where they bought another cattle ranch in Burns Lake, B.C. In 1974, after Loretta graduated high school, they moved one last time to the Hythe area. Miller Patterson was a big reason that they moved to Alberta where they bought a cattle ranch. After living here for 42 years, this was really home for the whole family. Geraldine was a 4H leader both in Montana and B.C. She was a real mentor to all the children she was involved with. Geraldine loved cooking, baking, canning fruits and vegetables, puzzles, embroidering and especially cross stitch. One of her biggest loves was letter writing and keeping in touch with all her friends and family. She loved telling stories and had a great sense of humor and loved all animals. Geraldine loved her dogs and cats, but her true love was her family who will always miss her. She will be missed by all those who knew her. Geraldine was predeceased by her parents Clarence and Catherine Clark, her husband Alfred in 1988, her brother Jack Clark in 2000 and her children; infant David in 1938 and her daughter Kay in 1957. Geraldine is survived by her children Danny, Mike and Loretta, her sister Bea Rose of Rockford, Illinois, as well as two nieces, two nephews, several great-nieces, great-nephews, great-great nieces and great-great nephews, all of who reside in the states except for Frances Schlemmer from Edmonton, AB. A Funeral Service was held on Wednesday, September 21, 2016 at 11:00 AM at the St. Mary’s Catholic Church, Beaverlodge, Alberta. Father Sylvanus Omali officiated. Interment followed in the Hythe Cemetery. The Schlemmer family would like to express their gratitude to the staff at the Hythe Continuing Care Centre for their care of Geraldine. For friends so wishing, donations may be made in memory of Geraldine to the South Peace Centennial Museum, Box 493 Beaverlodge, AB T0H0C0. Very Respectfully Beaverlodge Funeral Service
Share Your Memory of
Geraldine
Upload Your Memory View All Memories
Be the first to upload a memory!
Share A Memory