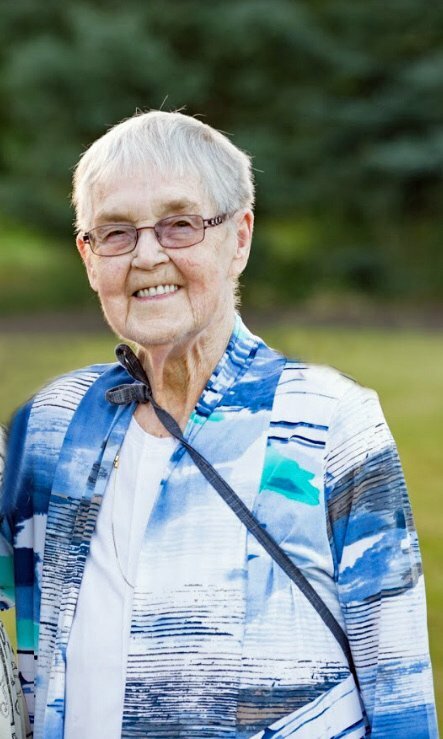 Mildred Carlstad, a long time resident of Beaverlodge, Alberta passed away peacefully with family by her side on Wednesday, December 13, 2017 in Beaverlodge at the age of 90 years. Mildred is predeceased by her parents Gustav and Ragna Christenson, her brother Leonard, husband Alvin Carlstad, special friend Herb Jones, her in-laws Edgar Carlstad, Ordian and Ruth Carlstad, Stanley Carlstad, Dennis Carlstad, Ron Dreyer, Tom Farnsworth, Kenneth Schultz and Alex Lovas. Mildred (Auntie Milly) will be forever remembered by her five daughters and one son: Inez (Terry) Thompson, Brenda Carlstad (John Elias), Joann (Ken) Rueckert, Harley Carlstad (Lauri Jewitt), Merilyn Carlstad (Paul Allan) and Lorraine (Grant) McEwan, Donald (Shirley) Olson her "adopted son from across the road", grandchildren: Susan (Cory), Kristopher, Cameron (Amanda), Cy, Alanna (Heath), Jordan (Trich), Rylee (Jonas), Darci, Gunnar, Jake, Cailin, Emerson and Ainsley, and her great grandchildren: Keiran, Kinsee, Dason, Lilla and Natalie. She is also survived by her brothers Clarence Christenson and Erwin (Gail) Christenson, her sisters Gladys Farnsworth, Hazel Lovas and Frances (Howard) Prier, sisters-in-law Violet Dreyer, Ruth Carlstad and Gloria Carlstad, along with numerous nieces and nephews. Mildred's large, extended family recently gathered to celebrate her 90th birthday. She was a dedicated volunteer to the Hythe Legion, 4-H, and Valhalla Alberta WI. She was well known for her sewing expertise, recently specializing in quilts, and enjoyed passing on her knowledge to her family and others interested in sewing. A Celebration of Life was held on Saturday, April 28, 2018 at 2:00 PM at the Hythe Legion. Interment was held in the Valhalla Centre Cemetery. In memory of Mildred, please perform a random act of kindness. Very Respectfully Beaverlodge Funeral Service
Share Your Memory of
Mildred
Upload Your Memory View All Memories
Be the first to upload a memory!
Share A Memory