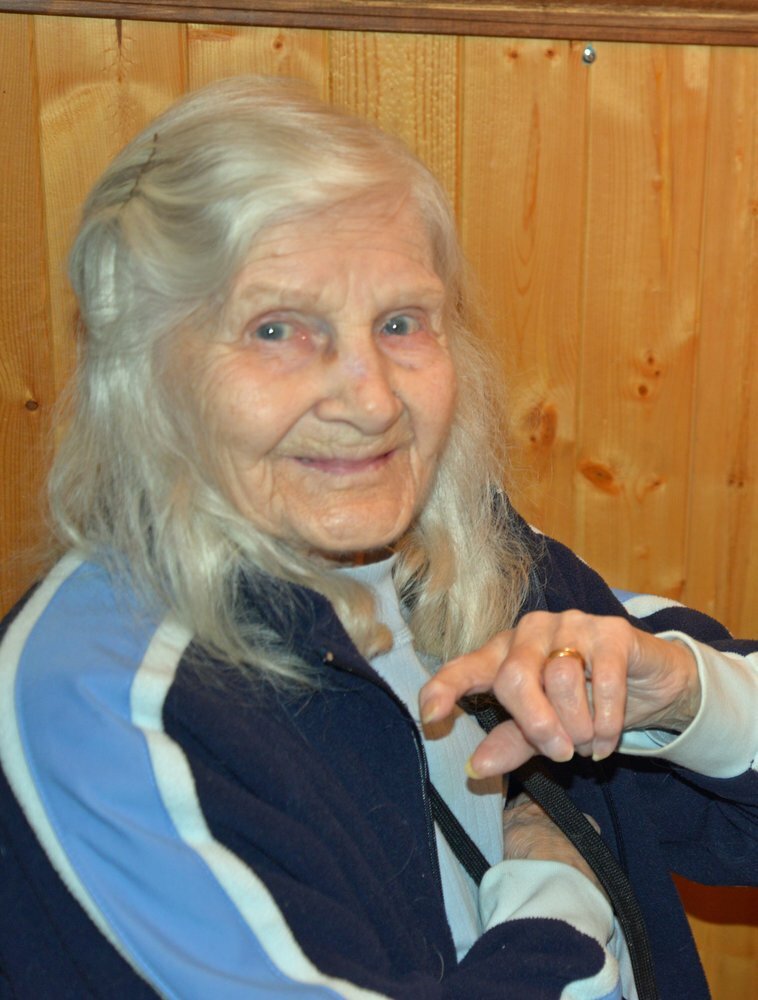 It is with deep sadness that we announce the passing of Eileen Elizabeth Allingham, beloved mother, grandmother and great-grandmother, on Saturday, July 29, 2017 at the Hythe Continuing Care Centre at the age of 95 years. Eileen was born the eldest of two children, on May 19, 1922 in Yorkshire, England. As a child, she was musically gifted, loved to dance and enjoyed life to the fullest. Having lost two fiancés in the Second World War, her father forbid that she date another soldier, but she was swept off her feet by Henry Thomas Allingham and so disobeyed her father and became once again engaged. On a beautiful September day in 1944, she wed Henry (better known as Harry) and so began one of the most beautiful love stories. During WWII, Eileen contributed to the war effort by wiring Halifax Bombers and by working with highly dangerous cordite, which she packed into ammo shells. Wishing to immigrate to Canada for a more promising future, Eileen bravely embarked on a transatlantic voyage by ship with her 9 month old son. Eileen had to make this arduous journey on her own, as Harry had gone ahead to secure employment and a place to live. Harry and Eileen made their home in Quebec for 30 years, then bravely moved west, to Alberta, with the pioneer spirit to once again start all over. When it came to her family, Eileen was like a protective Bantam hen, as she often fretted over the welfare of her family. Eileen was a devoted wife and an excellent mother who doted on her children. She took great pride in meticulously keeping her home, and her house was often filled with the aroma of freshly baked bread or a delicious meal and the beautiful sound of her singing as she went about her work. When the time came to be a grandmother and then a great-grandmother, Eileen always had a sweet treat and a glass of ginger ale for whichever child should turn up on her doorstep. There was never a shortage of hugs and kisses. Eileen also had such a big heart that she ‘adopted’ some lucky individuals into her family (Linda Todorovic, and Henry Schultz to name a few), and to them, she was like a mother. Besides her family, Eileen’s many passions included singing, driving her 1963 Chevy Impala, ballroom dancing (she and Harry received a standing ovation on more than one occasion at the Queen Elizabeth Ballroom in Montreal!), cross country skiing and golfing (when she could no longer golf, she would always accompany Harry as he continued his favourite hobby into his nineties!). During her retirement, when her and Harry’s health permitted, she travelled to Vancouver Island to spend the winter with her beloved daughter and family on the Island. In her final years, Eileen took great comfort in spending time on the farm with her son Lionel and daughter-in-law Daniela, daily phone conversations with her daughter Gloria, and visits with her friend Henry Schultz, her grandchildren and great-grandchildren. Eileen was predeceased by her brother Raymond, her loving husband Harry, her great grandson Cale, and 3 great-grandbabies. She leaves to mourn her son Lionel (Daniela), her daughter Gloria (Jacques), 7 grandchildren and 19 great-grandchildren. Eileen was a very kind soul who will be greatly missed by her family and those in the community of Beaverlodge, as she was well known and loved by many in the area. We however take great solace knowing we now have a fabulous guardian angel, even as she waltzes around heaven in the arms of her beloved husband Harry. We would like to say a special thanks to all the doctors who contributed to Eileen’s care over the years, and especially to Dr. Presley who, in Eileen’s final years, devoted a great deal of time ensuring she received the proper care. Dr. Presley, you have a very kind heart, and we deeply appreciate the love you showed to our “Nanny”. We would also like to thank the staff at Hythe Guardian Pharmacy and all those who participated in Eileen’s care at Hythe Continuing Care. Your outstanding compassion did not go unnoticed over the past few years. We thank especially the nurse, Jessica, who showed tremendous empathy during the final days. At Eileen’s request, no formal funeral service will be held. Her family will gather privately at a later date to celebrate her life and honour her legacy. For friends so wishing, donations may be made in memory of Eileen to the Hythe Nursing Home Foundation, PO Box 100, Hythe, AB, T0H 2C0. Very Respectfully Beaverlodge Funeral Service
Share Your Memory of
Eileen
Upload Your Memory View All Memories
Be the first to upload a memory!
Share A Memory