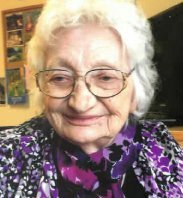 It is with great sadness that we announce the passing of Stella McLauchlan, a longtime resident of Beaverlodge, AB. Stella passed away on Sunday, December 29, 2019 in Hythe, AB, at the age of 94 years. Stella was born on February 22, 1925 in Chlebowicy, Poland to Harry and Julia Glowaski. She immigrated to Canada at the age of 5 and arrived with her mother and sister, Anne, at Pier 21 in Halifax. They then took the train to Wembley, where they met up with her dad who had come earlier and set up their home on Saskatoon Mountain. Stella attended Mountainside School and worked with various people in the area. In 1948, she married Edward McLauchlan and raised four children and granddaughter, Rhonda. Stella’s greatest joy was caring for her family. She also enjoyed gardening, picking berries and playing canasta with her friends. Stella was predeceased by her loving husband; Edward, daughter; Sharon Unruh, parents; Harry and Julia, and siblings; Anne, Ted, Jean and Edward. Stella is survived by her children; Wayne McLauchlan (Kyla), Joan (Jerry) Kerr, Carol (Dennis) Cassity and daughter-in-law; Beverly McLauchlan, grandchildren; Rhonda (Eldon) Johnson, Lauri-Anne (Peter) Stolic, Sheri-Lynn Cassity (Patrick), Darrel McLauchlan, Calvin Cassity (Latha), Kelly Kerr (Cherry), Kelsey Kerr, and 11 great-grandchildren, sister; Mary and brother; Leonard. With respect to Stella’s wishes, no formal funeral service will be held. Interment will be at a later date. Stella’s family would like thank Dr. Crowe and the staff of Hythe Continuing Care Centre for the care and support over the years, and for all the friends that have stopped by for a visit. For friends so wishing, donations may be made in memory of Stella to a charity of one’s choice. Very Respectfully Beaverlodge Funeral Service
Share Your Memory of
Stella
Upload Your Memory View All Memories
Be the first to upload a memory!
Share A Memory