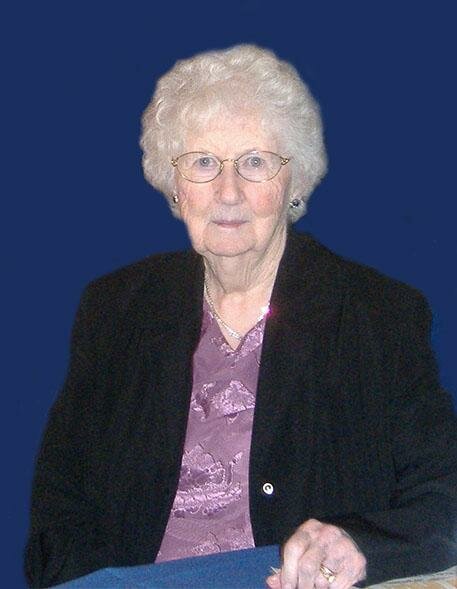 Norma Kabanuk, a long time resident of Hines Creek, Alberta (1930-2000) and of Beaverlodge, Alberta (2000-2016) passed away peacefully at home with family by her side on Tuesday, May 24, 2016 at the age of 99 years. Norma was born in Tisdale, Saskatchewan on April 26, 1917. Her family moved to Hines Creek in 1930 to establish the first store in town. After the passing of her mother, Norma at the age of 15 went on to raise her four siblings while also working for her father in the family restaurant and general store. This is where she later met her husband Alex Kabanuk. They married in 1940 and had two children, Lyle born in 1941 and Karen born in 1948. Norma was a very caring and hard working lady who loved to socialize, bake, do crafts, garden, travel, and spend time in the outdoors. Her two greatest passions were growing flowers and oil painting. She called nature her church. She and her husband Alex spent a great deal of time collecting rocks for landscaping, building beautiful stonework fencing as well as a fireplace. From the diamond willow they collected, they built tables, clocks and lamps after Alex retired from the Esso garage he owned and worked at in Hines Creek. Norma enjoyed being President for several years of the Hines Creek U.C.W. as well as the Arts and Crafts Club where she also taught oil painting. Following the passing of her husband and with the encouragement of her granddaughter Wendy, she moved to Beaverlodge to be closer to family. Upon moving to Beaverlodge from Hines Creek, Norma continued to enjoy gardening from her own apartment as well as at the farms of her daughter and granddaughter. For over 20 years she was able to enjoy living close to her grandchildren and great-grandchildren in Beaverlodge. She recently became a great-great grandmother and enjoyed hosting large family gatherings where she continued to cook and visit often. She continued to live on her own and still drive her Bronco 4x4 well into her 90’s. Aside from gardening, Norma was a lover of wildlife, art and poetry. She enjoyed her time in nature where she found inspiration to paint and draw. As she had so many years ago in Hines Creek, she volunteered as a painting instructor again in her 90’s and inspired many of her grandchildren and neighbours to pursue art and photography. She will be sadly missed by many friends and family. She always felt fortunate to have lived such a long and beautiful life so close to such a large family. She left on her own terms, with bright eyes, clear mind and spirited sense of humor. As we grieve for her passing, we know she looks forward to reuniting with her parents, her husband, her son, and siblings who passed so very many years ago. We know she will "Enter Heaven with a Happy Heart". Norma was predeceased by her mother in 1932, her father Norman Woolsey in 1972, her husband Alex in 1990, her son Lyle in 1997 as well as her four siblings Harold Woosley, Elva Lambrecht, Raymond Woolsey and Peggy Modrall. Norma will be sadly missed by her family; daughter Karen Smith, married to Sterling Smith (1946-2013), son Lyle (1941-1997) married to Eleanor Kabanuk. Her grandchildren; Wendy and Miles, Calvin and Karen, Janice, Michael and Carrie, as well as Patricia and Darcy. Her great grandchildren; Kimberly, Alex, Colton (Chelsea), Johnathon (Kara), Katelyn (Nile), Brandon (Erin), Steven (Tessa), Kyle (Bobbie), Willow, Paige, Megan and Sara as well as her great-great grandchildren Avery and Ryder. Along with her nieces and nephews; Teresa and Bob Groves, Blaine and Karen Modrall, Mark and Teresa Modrall, Gail, Norman and Monica Modrall, Peter and Vivian Woolsey, Marian and Rudy Roessler, Greg and Marianna Lambrecht, and Lorene (1950-2012) and Chris Putnam. A Funeral Service was held on Friday, May 27, 2016 at 10:00 AM at the Beaverlodge United Church. Pastor Neal Palmer officiated. Interment followed in the Hinterland Cemetery, Hines Creek, Alberta. For friends so wishing, donations may be made in memory of Norma to the End of Steel Heritage Society, Box 686 Hines Creek, AB T0H 2A0. Very Respectfully Beaverlodge Funeral Service
Share Your Memory of
Norma
Upload Your Memory View All Memories
Be the first to upload a memory!
Share A Memory