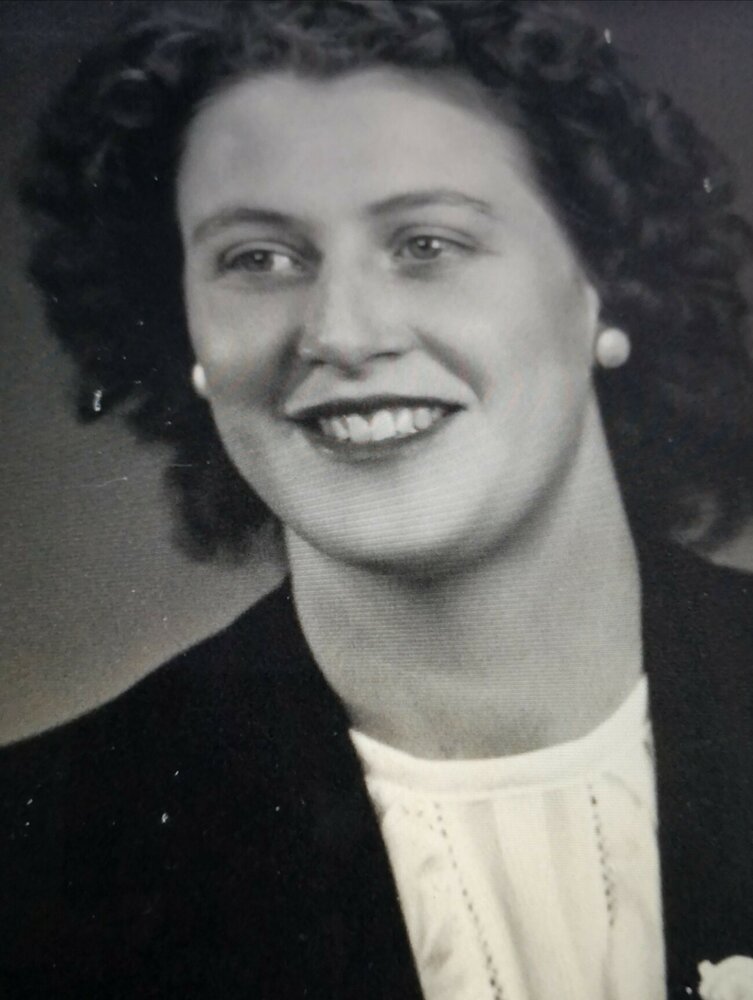 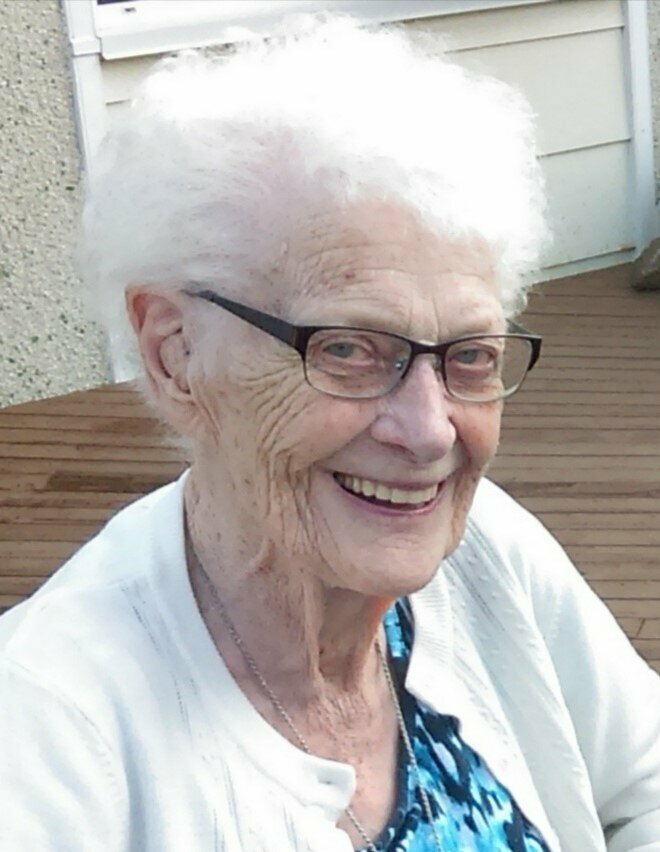 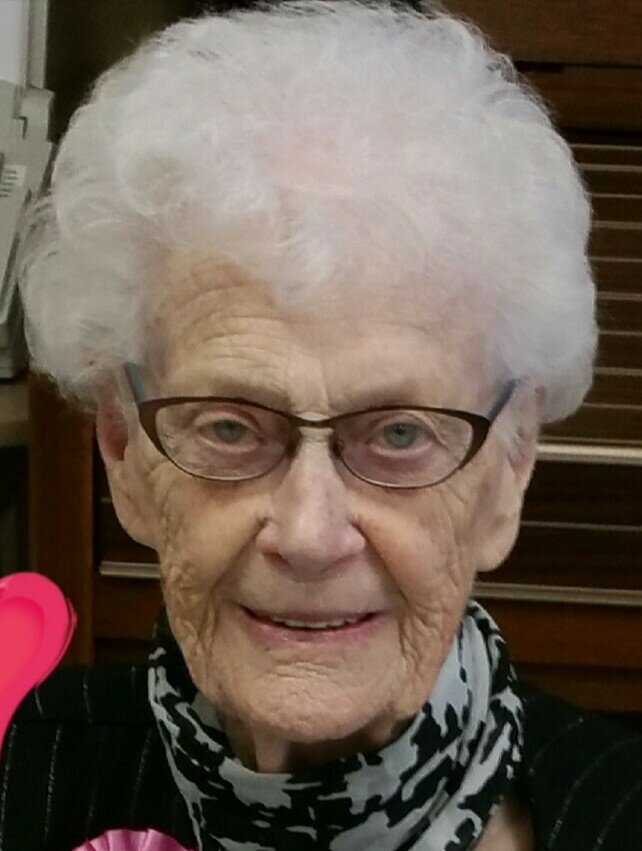 Joyce Margaret (Funnell) Martin, passed away on November 15, 2012 at the age of 95 at the Hythe Continuing Care Center with family by her side. Joyce was born on March 20, 1926, third child of Arthur and Kathleen (Mickey) Funnell. Arthur and Kath owned and operated the Halcourt Grocery Store and Post Office for many years. Joyce was born in the house behind the store. Kathleen and a neighbor were both in labour at the same time with the District Nurse running back and forth between them, but Joyce beat Don Kinsman by three hours. Joyce grew up at the Halcourt Store, going to school in the one room school next door. She started helping at the store and the Halcourt Curling rink by age 11. She played ball, ran foot races (and won she told us) at the many local family picnics at the Red Willow picnic grounds. She worked at the store until age 19, and by this time knew the very shy young handsome Martin boy, who would win her heart. She spread her wings and went to Edmonton for a while, working at Woodwards Department Store and living with family and acquaintances. She then followed her heart to Langley and New Westminster BC, where she worked at a store and lived with friends. Incidentally, that same young Martin gentleman was also working in the area. By 1949 they knew they wanted to get married, so moved back home and on August 2, 1950, Joyce became the bride of Arthur Martin, youngest child of William and Sarah Martin, in the tiny church which used to sit at Halcourt corner. Mom and Dad took over operation of the Halcourt Store for a few years, they also bought land west and north of Halcourt, eventually moving out there and farming full time. In 1951, Margaret came along, son Brian in 1956, then to their surprise, Kathy in 1961. It was always a good day when Mom told us if we churned homemade ice cream, we would all go to the river for swimming, fried chicken supper, and ice cream after Dad came in from the field. Mom started working at the Beaverlodge Medical Clinic for Dr. Ron Jarvis in 1970, then continued with Dr. Grabke for a total of 10 years. Joyce and Nora Olson, who worked for Dr. Miller took turns driving into town to work, always sharing a bag of popcorn twists for the road. Dad made many comments about the constant “mess” in the car, of empty twist bags and individual twists that got away. They retired, made many trips to the Okanogan, USA, Mexico, and fishing trips to Two Lakes, Sturgeon Lake, and Babine Lake with friends. There were many canasta nights and house parties with family and neighbors, huge meals, Mom made during harvest and baling season. She was active with the Halcourt Ladies Club, Anglican Church, Beaverlodge Legion, Beaverlodge Lion’s Club, and the Seniors Center. After Dad passed in 1995, she decided to move into an apartment in Beaverlodge. She added her name to the waiting list for Amisk Court, but did not move in there until 2012, which was fortuitous, as she fell and fractured her hip outside while packing for the move. While she was in the hospital, her family packed up the apartment and moved it all to Amisk Court for her. She enjoyed the social aspect of Amisk and had two sisters-in-law living there as well. She didn’t have to put a coat on to go for a walk, go out for entertainment, or start her car. Everyone was always welcome at Mom’s door, whether family or friends and family could never stay long enough as far as she was concerned. Joyce was predeceased by her parents Art and Kath Funnell, husband and best friend Arthur Martin, brothers and sisters-in-law, Tom and Annabelle Funnell, Bob and Anne Funnell, sister Kathleen (Snooks) and Billy McNaughton; In-laws, Peter and Jenny (Martin) McNaughton, John and Patsy (Meraw) Martin, Robert and Eleanor (Loven) Martin, Bill and Sadie (Martin) Baird, Conley Martin, Sam and Peggy (Martin) Martin, Tom and Lois (Martin) Hill. If our information is incorrect, Joyce was the last of her generation on the Funnell side. Mom will terribly missed by Marg and Lorne, Brian and JoAnne, Kathy and Bryan; grandchildren Shelley (Rob) Hatton, Jason Hatton, Justin, Brittany and Dylan Sinkevich, Scott Martin, Dallas Martin (Crystal), Tammy Martin (Kelly), Jamie and Dave Riley, and Chelsey Kehler. Twelve great-grandchildren, and three great great grandchildren; numerous nieces, nephews, and friends, and sister-in-law Arlene Martin. As per Joyce’s wishes, there will be no formal funeral service and a small celebration of her life will be held at a later date, final resting place will be at the Halcourt Cemetery. Anyone wishing to do so, may make donations to the Hythe Continuing Care Center. We would like to thank ALL of the staff at the Hythe Continuing Care Centre, for looking after Mom so well right through to the final moments. Very respectfully, Beaverlodge Funeral Service.
Share Your Memory of
Joyce
Upload Your Memory View All Memories
Be the first to upload a memory!
Share A Memory