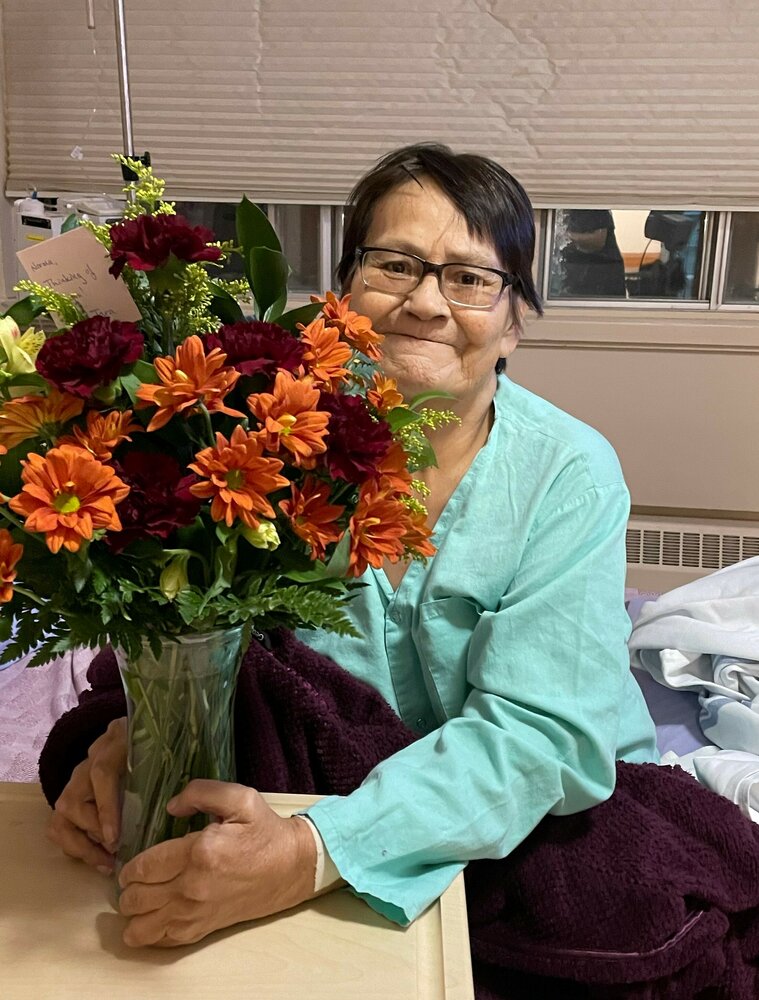 It is with sincere sadness that the family of Norma Horseman, resident of Horse Lake, AB, announces her passing after struggling with an aggressive cancer on November 12, 2021, at the Beaverlodge Hospital at the age of 65 years old. Norma was born on March 23, 1956 at the Beaverlodge Hospital to Lillian (Horseman) Savard and Clarence Letendre. She passed away on November 12, 2021 at 3:25 AM. Norma was raised by her otanskotapanak (Great Grandparents), Narcisse and Caroline. She lived with Caroline, and her cousins, Stella and Dale until she moved out in her later teenage years. Norma was adopted through custom adoption, by her Aunty, Delia when her mother passed away in 1973. She lived in Horse Lake in her younger years. She then moved to Grande Cache to work as a coal miner when she was a young woman. Norma often said this was the job she loved the most. Next, she worked at the Hythe Hotel (Hilton) after taking a mixology course in Edmonton. Norma also worked in various other jobs throughout her life and always enjoyed working. She continued to work until the arthritic pain became too painful for her to perform physical duties. Norma also sat on council for Horse Lake in the latter part of the eighties. She also spent a few years in Edmonton where her boys lived with her for a short time. She also lived in Kamloops for about a year. She would later move back to Horse Lake where she would remain until her passing. Norma loved reading books and enjoyed surfing the net to retrieve information about various topics that mostly related to Indigenous issues or medicinal remedies for the pain she often had to endure. She enjoyed visiting with her friends near and far, whether in person, or on the phone. We cannot forget to mention how much Norma loved playing fastball with the Beaverlodge Bumperettes and the Horse Lake Arrows. Norma was clocked at pitching speeds of 60 to 80 miles per hour. In her final days, Norma asked her sister, Darlene, “Was I a competitive player?” Her sister just laughed and said, “What do you think?” Norma had a love for true stories, especially true crime stories and documentaries. This would also include movies and books about Indigenous people in history. Because of Norma’s passion for reading and learning about the history of her people, she decided to go back to school to get a law degree. She wanted to protect the rights of people in her community of Horse Lake and felt the only way she could do that was to do it legally. Even through her arthritic pain, she completed her Grades 9 through 12 English courses, so that she could begin her academic journey at the Grande Prairie Regional College in the Open Studies Program. Unfortunately, after only one month of attending University level courses, Norma was diagnosed with an aggressive inoperable cancer that would force her to withdraw from her studies. As a result of Norma’s hard work and efforts in her academic studies, the Grande Prairie Regional College awarded Norma with a Certificate of Achievement, a Pendleton Blanket from the Circle of Indigenous Students and an Eagle’s Feather and Holder from the elders in Residence. Norma was much loved by those who knew her best because of her strong independent nature who rarely asked anyone for help even when she needed it most. She is most admired for her strength and determination to overcome many obstacles throughout her life. Being the first woman in her community to disclose that she was two-spirited, she endured hatred and abuse from people that believed being anything, but heterosexual was going against God. In all honesty, Norma was responsible for paving the way for people in our community who would identify as anything but heterosexual. We would not be honouring Norma if we forget to mention that on Friday, November 12, 2021, the Grande Prairie Regional College was planning on honouring Norma with a ceremony to show her family and community how proud they were of her academic achievements, unfortunately Norma passed away in the wee hours of the morning of the scheduled ceremony, so the ceremony was cancelled. The college also lowered the flags at half-mast in her honour and will remain so, until the day of her burial. Norma will be remembered by her son; Patrick (Carrie) and their children, Isaac, Montana and Richard, son; Leslie and his daughter Alyssa and grandson Jackson, sisters; Judy, Carolyn (Shirley), Gail, Darlene (Kathy), Charlotte, Marlene, Katherine (Merv), and Holly (Taija), brothers; Robert (Bonnie), Casey (Karen), Dale (Dorothy), grandpa Jim and many, many cousins. She was predeceased by her mother Lillian, father Clarence, Stepdad Walter, otansotapanak, Narcisse and Caroline, second mother Delia, aunties Ruth, Verna, Eileen, Audrey, Kathleen, uncles, Howard, Don, and John, grandmas Christine, Lottie, Jean and Nellie and Grandpa Ernie, grandchildren Christian, Shaylene and Kaitlynn. Funeral Service for Norma will be held at the Horse Lake Cultural/Recreation Centre on Saturday, November 20, 2021 @ 1:00PM. Funeral Service will be officiated by Elder, Loretta Parenteau-English and will be laid to rest in Hythe Cemetery. The family would like to thank Dr. Crowe and the Beaverlodge Nurses and Staff for their kindness in Norma’s final days. We appreciated your compassion and understanding during her time of need. We will love you and miss you forever mom, grandma, sister, niece, granddaughter, cousin and friend. Very Respectfully, Beaverlodge Funeral Service
Share Your Memory of
Norma
Upload Your Memory View All Memories
Be the first to upload a memory!
Share A Memory