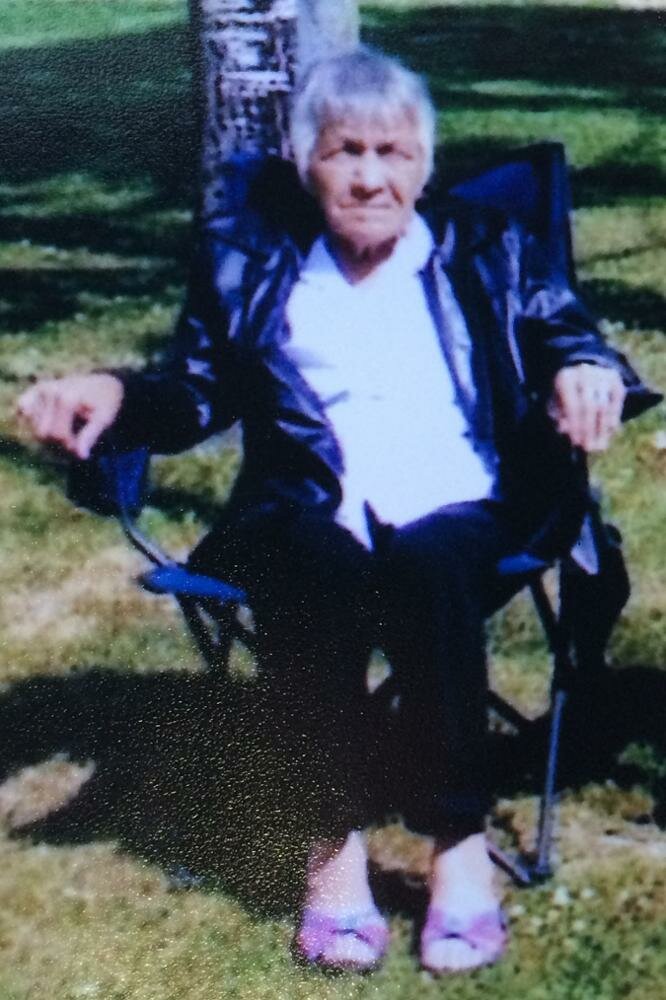 Glenn passed away peacefully on Tuesday, March 19, 2013 at his home in Hythe, Alberta surrounded by love at the age of 81 years. He was born in Valhalla on December 28, 1931 to Clarence and Volberg Peterson. Glenn was the second of nine children and was raised on a farm outside of Valhalla, Alberta. Being the oldest male in a large family, he quickly learned to become a provider. He was hunting and trapping by the age of ten, he and his dad purchased a trap line when Glenn was only 16. The 'Profitable' trap line still remains in the family today. Glenn spent much of his time checking their trap line, he would walk the 12 miles and along the way may have poached 1, 2 or 22 moose to provide for his family as well as many neighboring families. Glenn met his future wife Corinne, at a Hythe Mustangs' game in 1955 when he convinced his friend Rueben Christopherson to trade vehicles and passengers. One of his new passengers, Corinne Merle Gray would become the love of this life. With Glenn's sister Joyce and Corinne's brother Ben at their sides, they were married on February 22, 1957 in -44 degree weather. Soon thereafter, Glenn and Corinne were blessed for a very short time with the birth of their first child Debbie. In 1958 Brian was born, followed by Ric, Rhonda, Duayne and Derek. After several years Renay was born followed by the baby of the family Travis. Once again Glenn had a large family to provide for, but he was a hard working man. He worked on a slashing crew, he worked alongside his dad logging land and he would later log again with his own kids. After many years of working in the bush he earned the title 'Godfather of the Saddle Hills'. He owned his own logging company, Ma & Pa Logging, and would semi-retire as the 'Pop Nazi' at the Hythe Tags. All of Glenn's kids and many of his grandkids were fortunate enough to have worked alongside Glenn and were able to inherit his excellent work ethic. Glenn played for the Valhalla Vikings softball team and later coached his kids when they played for the Vikings. He also liked the Toronto Blue Jays and the Edmonton Oilers but, only when they were winning. He was also a gambling man, when he wasn't playing at the casino or playing at provincial card tournaments you could find him playing cards with family and friends. Glenn played Bingo for many years with his faithful crew of Rhonda, Kelly and Cindy. Ol' One Eye's bingo dobbing skills were second to none. Glenn was an avid traveler, visiting Mexico, New Zealand, Australia, Sweden, Africa and Peru which happened to be one of the lucky countries to see his generosity. Glenn enjoyed bartering, but in his strange way he usually ended up paying more. He became famous among shoe shine boys in Peru for paying nearly 50 times the going rate. He also traveled to several US states and to all of Canada's provinces and territories which included numerous hunting and fishing trips with his family. Many memories were made at the cabin, one of Glenn's favorite places to go. Glenn enjoyed reading, whether it was sitting by the fire or in the sun by the pool. He also enjoyed and was incredibly proud to watch his grandchildren and great grandchildren play hockey. He was also very proud of the smartest dog in the world, his beloved Roxy. In his eyes she could do no wrong. A Celebration of Glenn's Life was held at 2:00 PM on Tuesday, March 26, 2013 at the Royal Canadian Legion Branch 93 in Hythe, Alberta. Interment will be at a later date. Glenn was predeceased by his daughter Debbie Peterson, parents Clarence and Volberg Peterson, in-laws Helen and Culver Gray, his brothers Lawrence and Lloyd Peterson, brother-in-law Ordean Carlstad and his beloved dog Roxy. Glenn is survived by his loving wife Corinne of 56 years, his 7 children; Brian (Tiny), Ric (Penni), Rhonda (Barry), Duayne (Kelly), Derek (Kenna), Renay (Tim), and Travis, his 22 grandchildren, 14 soon-to-be 15 great grandchildren, his 3 brothers, 3 sisters and numerous nieces, nephews and in-laws. Glenn spent most of his life logging, alongside his father & later his sons. Glenn loved the bush and spent much of his time hunting, trapping & staying at his cabin with family & friends. Glenn also loved to play cards, his favorite game was whist. His love of hunting, trapping, the cabin & playing cards are all things he passed on to his kids & grandkids. In his retirement Glenn also enjoyed watching his grandkids & great grandkids play hockey. For friends so wishing, donations may be made in memory of Glenn, to the Hythe Fire Department Box 69 Hythe, Alberta T0H 2C0 or to the Hythe Minor Hockey Association Box 679 Hythe, Alberta T0H 2C0. Very Respectfully Beaverlodge Funeral Service

Share Your Memory of
Glenn
Upload Your Memory View All Memories
Be the first to upload a memory!
Share A Memory
Plant a Tree

A Division of Peace Funerals Inc.